…there was the HYC. They are taking applications.

UNBOXED is a series of “TED-type” talks with ample time for discussion and bouncing ideas off other like minded disciples.  Join us – you will only regret NOT attending.

The gist of this article seems to be persecution and repression are taking their toll in northern Nigeria, but the somewhat-misleading title of the article calls attention to some good news:

Those who are choosing to stay are experiencing a renewed fervour in their faith, according to the report, and some Christians reported that their churches in the north are growing as Muslims convert to Christianity. The report cited reasons including many Muslims having dreams of Jesus.

“Many among the Muslims want to become Christians, but they are afraid of being killed or pressured by fellow Muslims,” the report quoted one interviewee as saying.

Karl Vaters shares how we can “reduce the sting of failure when a new ministry doesn’t go as we had hoped”:

It might give us the courage to innovate more often.

The best way I know to reduce the sting of possible failure is this: put an expiration date on every new ministry idea.

Instead of launching a new idea as “the way we’re going to do ministry from now on”, tell people “Hey, we have this fun, new idea we’re going to try until the end of the summer!” Or December, or until Easter…

Then, at the end of the summer, if it doesn’t work, it stops happening, just like we announced. No failure, no problem. If it does work, we keep doing it. You can extend it for another three or six months. If it still works, we just keep doing it.

Putting expiration dates on ministries has several advantages. Here are a few.

Posted by OYC | Filed under Images 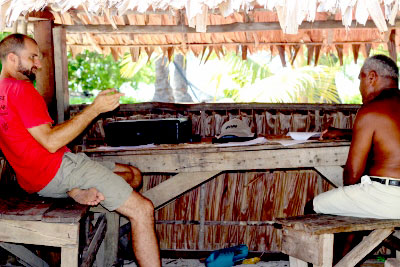 An update from Wycliffe:

For many years, Ezekiel served as the Lavukal translation committee chairman, and at times, he toured the 18 Lavukal villages and nearly single-handedly kept the interest in the translation concept alive.

Karl Vaters hits the nail on the head:

I love the church.

For a lot of years, “I love Jesus, but not the church” or “the church may stink, but it’s the only thing afloat” have been cool things for a lot of Christians to say.

I used to be one of those people. Not anymore.

This site has terrific graphics in PDF form for Bible teaching, with much of the material in Spanish, Indonesian and Chinese, too!