Something that every One Year Challenge applicant has in common is the questions. No matter how many times I talked to my contact at the site where I was planning to go for a OYC, there was still uncertainty. What are the brothers like? What about the meetings of the body (i.e. Sunday services, midweeks)? How does evangelism work? Here are some of my fears before going and somethings I wish I knew that would have helped me in the decision-making process.

Fears
When you go on a One Year Challenge, you’ll be on mission. This means the vast majority of the people in your city will have not heard the gospel. You’ll be in a smaller church, sometimes smaller than the size of your current Bibletalk. My church back in the US was 300 members in size—maybe more, I never got around to doing a census. We met in what we call “the building” for Sunday services and were organized into teens, campus, singles, marrieds, and international ministries.

The church at my OYC site consists of house churches that meet in disciples’ homes. My current house church (we call it “HC”) has a total of 6 disciples. We fit in an elevator or a minivan. I spend most of my time with my HC, from doing Sunday church and midweek, to making friends on campus, to spending time with friends, to studying the Bible with friends, to going on retreats, to doing sports activities and going on outings.

Before coming here, I was wary about this HC structure when I learned I would be spending most of my time with a limited number of people and that we only meet all together with the other HC’s for church two or three times a year. And because I was so spiritual, I wondered: (1) what if I don’t get along with the people in my HC? I’ll be trapped! (2) since HC’s are so isolated, wouldn’t the church be disunited? (3) will I be strangers to most disciples outside of my HC?

After getting here, I saw that:

(1) When you have a common goal and spend so much time and work so closely together you bond with your HC.

(2) Since HCs are so small and again spend a lot of time together, they tend to be of one mind and spirit. The disciples are loyal to each other and to their HC leader. When the HC leaders themselves are on the same page, the whole church is unified.

(3) Since HCs do almost everything separately, when you get to plan something with brothers and sisters from other HCs, it’s special and exciting! So even though we only have service all together two times a year, there are many other times when disciples from different HCs fellowship: spontaneous meals together, baptisms, dates, new years parties, weddings, end-of-semester activities, bike trips, Frisbee tournament, Bible Seminar, Bible Bowl, going to an elderly home to serve, sports competitions, and more. Below are some examples!

In the midst of a church with mission team members from places other than the US, we realized that only Americans celebrate Thanksgiving. 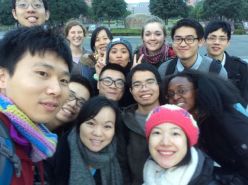 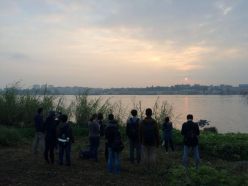 On New Year’s Eve, some disciples from many different HC’s went on an all-night prayer, praying the whole night until dawn. I conveniently joined them for the sunrise prayer.

A mix of disciples from 7 different HCs serving at an elderly home.

The first wedding where the bride and groom were two locally baptized disciples!

Ultimately, if you fear being in a smaller group, remember the words of Jesus himself:

For where two or three gather in my name, there am I with them.

Jesus will be with you! And a smaller group doesn’t necessarily mean less connection with disciples; often times it means more!

I suspect that the nature of mission teams is that they tend to stick together (literally). And I don’t blame them! You begin to realize that Jesus gave you these brothers and your sisters as your family in a foreign land. You’ll most likely be sticking closer to disciples than you were back in the States. Disciples become even more of your family on the mission field.

The downsides of meeting in HC’s are obvious. We don’t get the super-charged worship experiences that large services create. We sometimes have a hard time making announcements in a timely manner because we don’t have everyone together at the same time and at same place. You don’t get to see everyone every week.

But what I didn’t expect was that this restriction ultimately has some benefits:

When I was in campus in the U.S., I admired many gifted brothers. One was gifted in counseling and seemed always to know the right thing to say, one memorized each book of the New Testament and could study the Bible entirely from memory, one single-handedly led worship with a guitar, my evangelist’s sermons could move mountains, and my campus minister seemed invincible and convinced even members of fraternities to study the Bible.

I could hardly imagine how a church can survive without these people. Yet in a mission team with a small band of disciples, you won’t get superstar disciples. But what you will get is God’s strength instead of man’s, the gospel’s power as light shining in the darkness, and the glory of God as he masterfully provides for his people.

It is impossible to answer all the questions and resolve all the fears that you may have in considering going on a One Year Challenge. You might even find that you have some irrational subconscious fears. This is where faith comes in. Ask questions, pray, settle fears, but in the end go in faith!

1 thought on “What I Learned on a One Year Challenge”